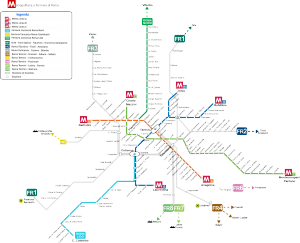 The Rome Metro (Italian: Metropolitana di Roma) is a rapid transit system that operates in Rome, Italy. It started operation in 1955, making it the oldest in the country.

The Metro comprises three lines – A (orange), B (blue) and C (green) – which operate on 60 km (37 mi) of route, serving 73 stations. The original lines in the system, lines A and B, form an X shape with the lines intersecting at Termini station, the main train station in Rome. Line B splits at the Bologna station into two branches. The third line opened in 2014 and connects to the rest of the system through an interchange with Line A at San Giovanni.

Rome’s local transport provider, ATAC, operates the Metro and several other rail services: the Roma–Lido line, the Roma–Giardinetti line, and the Roma–Nord line. The first of these, the Roma–Lido, which connects Rome to Ostia, on the sea, is effectively part of the Metro network, since it runs on similar lines and uses rolling stock similar to that in service on the Metro.

Line A runs from the southeastern suburbs of Rome, then along the northeast section of downtown, and then to the northern section of the city, near Vatican City. It connects with Line B, along with many other national and regional rail services, at Termini, and with Line C at San Giovanni. It has 27 stations, with terminals at Battistini and Anagnina. It is identified by the colour orange.

Line A was the second line built in Rome. Approval was given for the construction of the city’s second Metro line in 1959.

Work on Line A began in 1964 in the Tuscolana area, but suffered a series of delays caused by poor organisation.[citation needed] Above all, the originally planned cut and cover method of construction posed serious problems for road traffic in southeast Rome. Work on the Metro was suspended and began again five years later, using bored tunnels, which partially resolved the traffic problems but caused numerous claims for compensation for vibrations caused by the machines. Work was also frequently interrupted by archaeological finds made during the excavations, particularly near Piazza della Repubblica.

Line A entered service in February 1980. In the late 1990s, it was extended from Ottaviano, in the Prati district, to Battistini to the west.

Line B was the first Metro line in Rome. Line B connects the northeast of the city with the southwest. It has 26 stations with terminals at Rebibbia, Jonio and Laurentina (just east of EUR). It is identified by the colour blue. Transfers are available with Line A and other rail services at Termini station.

Line B was planned during the 1930s by the fascist government to provide a rapid connection between the main train station, Termini, and a new district to the southeast of the city, E42, the planned location of the Universal Exposition (or Expo), which was to be held in Rome in 1942. The exposition never took place due to Italy’s entry into the Second World War in 1940. When its construction was interrupted, some of the tunnels on the city-centre side of the Metro (between Termini and Piramide) had already been completed, and they were used as air raid shelters during the war.

Work restarted in 1948, together with the development of the site formerly designated for the Expo into a residential and business district under the name EUR. The Metro was officially opened on 9 February 1955 by the then President of the Republic, Luigi Einaudi. Regular services began the following day.

Opened on 9 November 2014, line C currently runs radially from San Giovanni, serving as an interchange station for Line A, to the eastern terminus of Pantano (the former terminus of the Roma–Giardinetti light railway). It is the first Metro line to extend beyond the city boundaries in Rome.

It is planned to extend to the northwest, towards Grottarossa (north of the Vatican), via the city centre; it will also intersect with Line A at Ottaviano (beside the Vatican), with Line B at Colosseo, and with the planned Line D at Piazza Venezia, thus creating a fourth Metro hub in Rome.

The first section of the line, from Centocelle to Pantano, is the furthest from the city centre and includes 15 of the planned 30 stops. A further 5.4-kilometre (3.4 mi) section of Line C, serving six additional stations, opened on 29 June 2015, as the line’s western terminus was moved from Parco di Centocelle to Lodi. On 12 May 2018, the western terminus was moved to San Giovanni (interchange station for line A). After this third phase, the line will be further extended with two stations, Amba Aradam/Ipponio and Fori Imperiali/Colosseo, located in the city centre. A further extension to Piazza Venezia was announced by Mayor Virginia Raggi in July 2019.

Progress on the line has been slow with projected completion dates being repeatedly delayed. Rome is one of the oldest cities in the world, and as such, the construction of the Metro system has encountered considerable obstacles owing to frequent archaeological discoveries. While the excavation of the tunnels themselves can be undertaken well below the probable location of most archaeological finds, the excavation of stairwells and ventilation shafts – which must, by necessity, connect with the surface – pose considerable difficulties.

The trains operating on line C are completely automated, and use the same AnsaldoBreda Driverless Metro system also featured on the Copenhagen Metro.