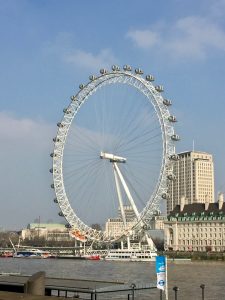 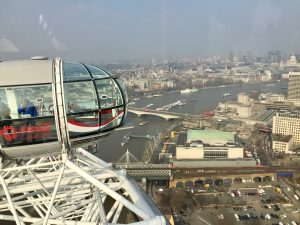 The London Eye used to offer the highest public viewing point in London until it was superseded by the 245-metre-high (804 ft) observation deck on the 72nd floor of The Shard, which opened to the public on 1 February 2013.

The London Eye adjoins the western end of Jubilee Gardens (previously the site of the former Dome of Discovery), on the South Bank of the River Thames between Westminster Bridge and Hungerford Bridge beside County Hall, in the London Borough of Lambeth. The nearest tube station is Westminster, 420 metres (1,378 ft) away.

In March 2020, the London Eye celebrated its 20th birthday by turning several of its pods into experiences themed around London, in partnership with its sponsor lastminute.com. The special experiences included a pub in a capsule, a west end theatre pod and a garden party with flower arrangements to represent the eight London Royal parks. 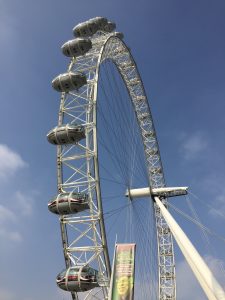 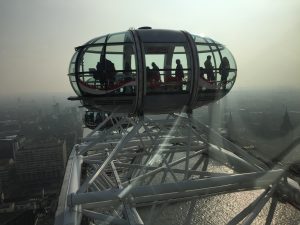 The wheel’s 32 sealed and air-conditioned ovoidal passenger capsules, designed[34] and supplied[35] by Poma, are attached to the external circumference of the wheel and rotated by electric motors. The capsules are numbered from 1 to 33, excluding number 13 for superstitious reasons.[36] Each of the 10-tonne (11-short-ton)[37] capsules represents one of the London Boroughs,[26] and holds up to 25 people,[38] who are free to walk around inside the capsule, though seating is provided. The wheel rotates at 26 cm (10 in) per second (about 0.9 km/h or 0.6 mph) so that one revolution takes about 30 minutes. It does not usually stop to take on passengers; the rotation rate is slow enough to allow passengers to walk on and off the moving capsules at ground level.[37] It is, however, stopped to allow disabled or elderly passengers time to embark and disembark safely.[39]

In 2009 the first stage of a £12.5 million capsule upgrade began. Each capsule was taken down and floated down the river to Tilbury Docks in Essex.[40]

On 2 June 2013 a passenger capsule was named the Coronation Capsule to mark the sixtieth anniversary of the coronation of Queen Elizabeth II.[41]